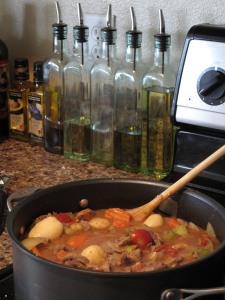 I used 2 pounds sirloin, sliced into short strips, because it’s what I had on hand. This is an excellent recipe. Abounding in flavor, but so easy to throw together.

NOTE: I do not currently have a Dutch oven, so I used a normal soup pot and it worked great – I let it simmer a bit longer to help the flavors further blend together.